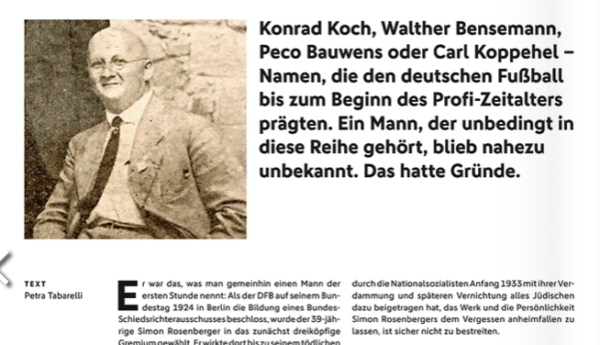 Simon Rosenberger was a German referee and football pioneer and supporter with heart and soul, who was committed to the idea that the game of football and the rules should be interpreted in the same way throughout Germany at that time. He worked for the magazine Kicker with Walther Bensemann and the DFB, the German national association.

Rosenberger encountered obstacles in his plans – not only among club officials and the press, but also within the referees.

Born in Munich and a Jewish believer, Rosenberger worked in the first half of the 1920s in Stuttgart as a sport journalist for Kicker in Konstanz and Stuttgart, and in the second half as the founder and publisher of the DFB refereeing newspaper in Cologne.

After he died at the age of 46, all the well-known German stars of football were certain in their obituaries that Simon Rosenberger would always be remembered.

But this was not so.

The Nazi era and the personal affectations of the Berlin referee, Carl Koppehel, completely erased him from memory in the years to come. And that is still the case today.

The memory of Simon Rosenberger’s legacy, which was believed so surely, has been buried. But it is not lost.

The first article about him has already appeared in the DFB Refereeing Newspaper, and I am currently writing a biography in German for and about Rosenberger. It will probably be published in late 2021. If there is sufficient demand, it will also be translated into English.