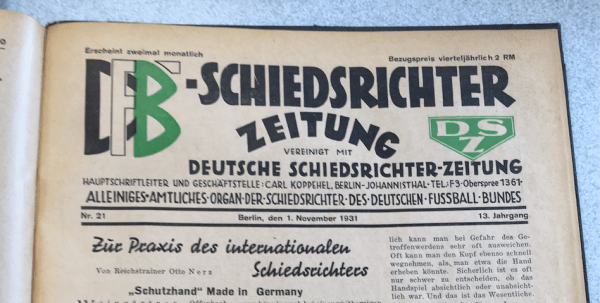 The Schutzhand in German, beschermen in Dutch. Not everywhere in world exist the myth about the reflex of holding your hands in front of your face to protect yourself when something suddenly comes at you. However, this reaction is inconvenient when playing football, because you risk an intentional or deliberate handball. It is better to turn your face away or duck.

I tell you more about the myth from the German perspective and would be glad if you let me know if this myth in your country exists and what name is has.

Yet the myth about the Schutzhand has been around for about 100 years. Exactly where this myth first arose is no longer discernible.

The myth of the Schutzhand in Germany

The coach of the men’s national team of Germany in 1931, Otto Nerz, wrote in the DFB’s refereeing journal about the Schutzhand. Nerz obviously did not used this term before that time.

However, in the period between the two world wars, people are as insecure about the subject of protective hand as they are today: Are there exceptions? The protection of the genitales, as already written above? Or at least, when the referee is absolutely sure that there is no intention, as Nerz wrote in 1931?

The Laws of the Game are clear

There has never been an exception for these cases in the Laws of the Game. A protective hand was never allowed and is still not allowed today. Although the Laws of the Game changed somewhat in the 20th century. At first handball had to be wilfully, then intentionally until 1995 and since then deliberately, in order to be punished. In addition, in recent months the handball law has been clarified and supplemented to the effect that no handball is permitted immediately before a goal is scored.

The myth of the Schutzhand is alive

But although the Laws of the Game are so clear, the myth remains. Maybe because it is an all too familiar reflex action and many people can’t even imagine that it could be punished. In any case, the discussions about handball and the protective hand have not changed in the last 100 years.

Nerz wrote as the final sentence in his article: „The ‚Schutzhand‘ will probably be discussed for a long time.“ He certainly didn’t know how much he was going to be right.