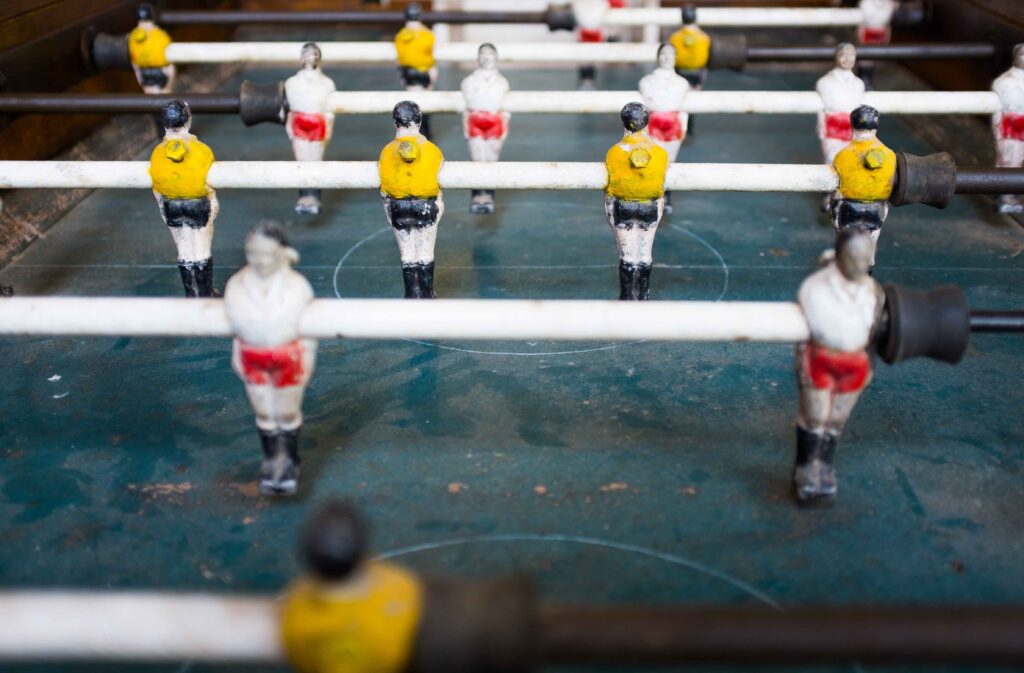 At the Annual General Meeting (AGM), the rule changes are discussed and the proposals submitted are decided by a three-quarters majority. The decision-makers are one representative from each of the four British football associations (England, Northern Ireland, Scotland, Wales) and four from FIFA (who have to vote en bloc).

This is easily possible via Paypal.me and Ko-Fi. Thank you very much!

Compared to recent years, the agenda for this year’s meeting was short, but dealt with the offside rule and handball – those two elements of the Laws of the Game that are arguably the most mentioned and discussed.

Added to this were discussions on the current Covid 19-related possibility of up to five substitutions per game, as well as the upcoming experiment on concussions.

More on the evolution of football rules and laws as well as the chronology of every law change since the early 19th century.

Seven months ago, I briefly reflected on the handball law (it really is strongly philosophical). Because handball is very much about justice.  But what is fair is something that every person values differently.  Moreover, the Laws of the Game are an attempt to standardise fair play. It is all too logical that this standardisation levels out the various, personal nuances of the sense of justice.

The historical evolution of the handball law

Handball was not always forbidden in football. This is particularly true of the football rules from the first half of the 19th century, which are reminiscent of rugby (running game). But even in early rules, which largely did not allow handball, there were two types of permitted handball.

One of them is still allowed today: the goalkeeper’s handball. Although it was not included in the FA Rules until 1871, it was probably allowed before then. In the following decades, the rules were defined more and more precisely: Goalkeepers may not carry the ball (1873), then they may carry it for two steps (1920) [four steps were only allowed in the post-war period]. They may only touch it with your hands in their own half (1882), then they may touch it with their hands in your own goal area (1903) or in your own penalty area (since 1912).

The other handball is no longer allowed: it was the fair catch, which still exists today in Rugby and American Football. It was banned in 1871. A fair catch is the act of catching a ball before it touches the ground. If in Rugby and American Football one has the choice between a fair catch (raising the arm (in former times carving a mark into the ground with the heel), then a free kick from that spot) and running with the ball in the arm, only the fair catch was adopted in football. It was also only possible to win a free kick via the fair catch. It was not until 1874, i.e. three years after the fair catch was banned, that the free kick was introduced for rule violations as a penalty for the disregarding team.

Otherwise, handball by field players has always been prohibited, but the wording was changed from wilfully (1863) to intentionally (1898) to deliberately (1995). The development of the law can be found here in the Handball section.

More on the change of the handball law for the 2020/21 season in my article from last year’s autumn.

In recent years, there have been repeated discussions about the handball: First, there were calls to make the handball more understandable, more concrete. Then, to make it easier or even to revise the 2019 changes. 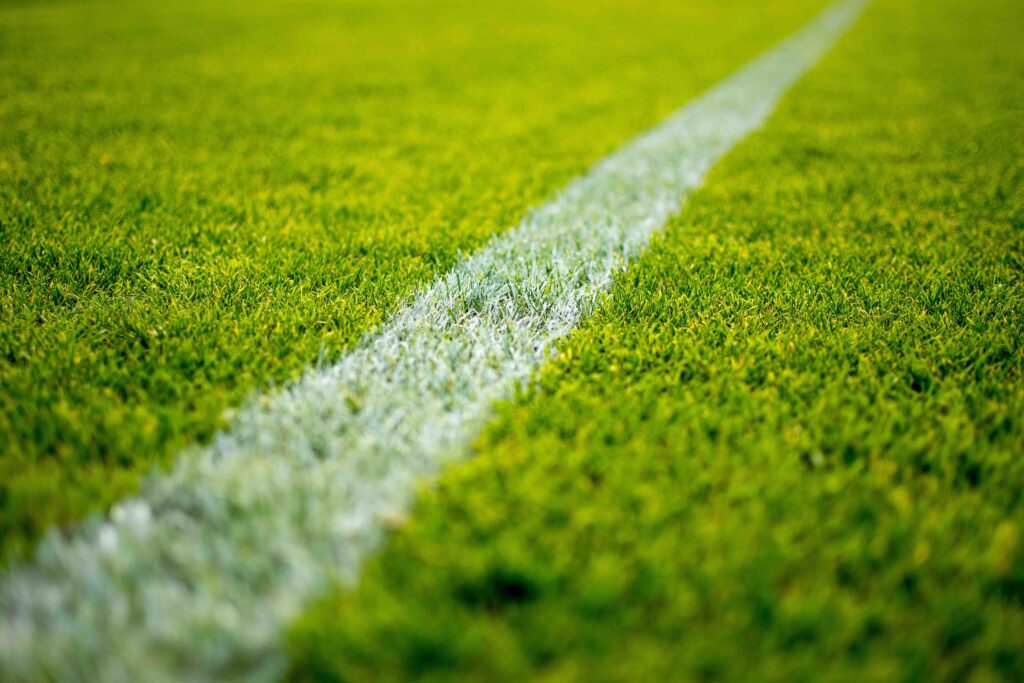 On the offside rule, there is a clarification for the Laws of the Game 2021/2022: If the arm is the foremost part of the body in an offside decision, the perpendicular for the calibrated line will be taken at the bottom of the armpit.

FIFA also provided information on possible adjustments to the offside rule through innovations that allow competitions with limited budgets to use VAR technology.

Also, updates on possible adjustments to the offside rule and the latest developments on innovations related to video assistant referees (VARs) that could allow competitions with more limited budgets to use VAR technology.

No law change or trial on the offside rule, just an interesting idea

Arsène Wenger (FIFA Chief of Global Football Development) also presented his proposal for a change to the offside rule. David Elleray (Technical Director of The IFAB) clarified that it was not a change or an experiment or a preferred solution, but just an interesting idea to pursue.

Wenger suggested that the 1990 amendment (same level is not an offside position) could be widened.

What does that mean? Imagine a defender moving backwards, a striker with his upper body already bent forward a bit more. According to the current rule, the attacking person would be offside with the upper body. However, if one foot (theoretically toe) of both persons is at the same level, there is no offside. This means an even more offensive game.

Changes to offside rules have an impact on offensive play like no other rule. When just one word was changed in 1925 – from „less than three players“ to „less than two players“ – hundreds more goals were scored in a season in England alone. So, it is no wonder that consideration was given to changing the offside rule to make the game more offensive and thus more attractive to spectators. There have also been nine different experiments with the offside rule in the last 150 years, none of which have become part of the rule (only in German).

At this year’s Soccerex there was a panel with, among others, Howard Webb on the topic: Changing Offside to keep fans Onside (with a link to the recording of the panel on Youtube).

Remember: the offside rule is not a penalty, it is a protective rule. Being offside is not a punishable offence. It is only punishable to intervene in the game from offside (active offside).

The historical development of the offside rule

If the rules are the fulcrum and the basic essence of the game of football, then the offside rule is a concentrate of that essence. I have written several times here and elsewhere about the evolution of the offside rule, most recently for the German Referee Newspaper (issue 02/2021) – online, publicly available here (in German).

In addition, further articles here on Nachspielzeiten as here on the origin of the offside rule and its initial evolution.

What is the purpose of the offside rule?

Not only is the offside rule a fairer option than no offside or a strict offside, it is also closely linked to the standardisation of football rules across national borders. This standardisation was necessitated by the football boom of the 1880s in England, comparable to some extent to the 1920s in Germany. Standardisation was preceded by the transformation of football from an entertainment game to a competitive one: the game of football was recognised as a source of income by various entrepreneurs and professional groups. It was now about winning, about revenue, about prestige – and thus „cheating“ also began.

You could say that the offside rule is just as necessary in modern football as an independent referee on the field. It is no longer enough to discuss briefly whether it was a foul, a handball or offside, as we used to do in the schoolyard, and then play on.

But the offside rule also shows us how the Laws of the Game and the game itself influence each other: The law change in 1866 in the FA Rules influenced the game towards combination play. This was later felt to be too defensive, which is why the law was changed as a consequence, again.

All changes to the offside rule since 1847 here. 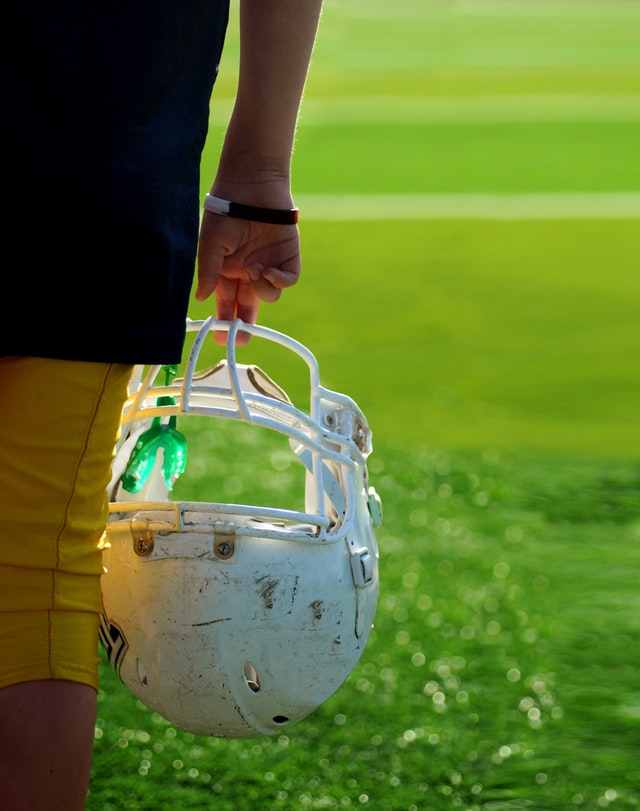 It was already discussed at last year’s AGM: Dealing with head injuries. Most of the time they occur because players bang their heads against each other in an air duel. It is not uncommon for players to suffer from symptoms resembling to concussion. But only rarely are they substituted, even though they struggle with their sense of balance for several seconds. This is especially true in men’s football. For men’s football, therefore, Rasenfunk presenter Max Ost is keeping a documentary on Twitter (in German).

How do you try to protect the health of the players? The IFAB describes this in detail on its homepage.

Variant 1 („Protocol A“): If there is a suspicion of concussion, one additional change per team is possible, which is not counted towards the original change quota.

Variant 2 („Protocol B“): Under the above circumstances, two additional substitutions per team are possible. Each time, the opposing team then also gets one additional change. This is intended to compensate for possible sporting disadvantages and make abuse of the rule less attractive.

The experiment has already been carried out since the beginning of the year by the football associations of the Netherlands, England, Portugal and the USA. FIFA also tested it during its Club World Cup last month. A report on the initial experience with the two variants was presented to the committee.

More could follow in the summer as interest has already been expressed by other associations. The end of the test phase is planned for August 2022. This trial is not part of the Laws of the Game 2021/2022.

The header did not become more common until the end of the 19th century. There is no evidence that the header became established because of the interdiction of the fair catch (see the historical evolution section above under handball in this post) was banned. But it fits the timing.

There is actually not too much discussion about the consequences of painful header duels, but there is about the consequence of headers in general. In the past, the ball had to be made of leather. The bladder was covered with pieces of leather sewn together with a thread. Football, a traditional game for the cooler months, was therefore also played in wet(ter) weather, causing the leather and the threads to become soaked with water.

Although the prescribed weight of the ball has not changed since 1937 (410-450 grams/14-16 ounces), it applies at the start of the game. Thus, 100 and more years ago, people discussed the consequences of the heavier headers and even wanted to ban them. But it never came to that.

Everything about the new Laws of the Game 2021/2022 on the homepage of The IFAB.