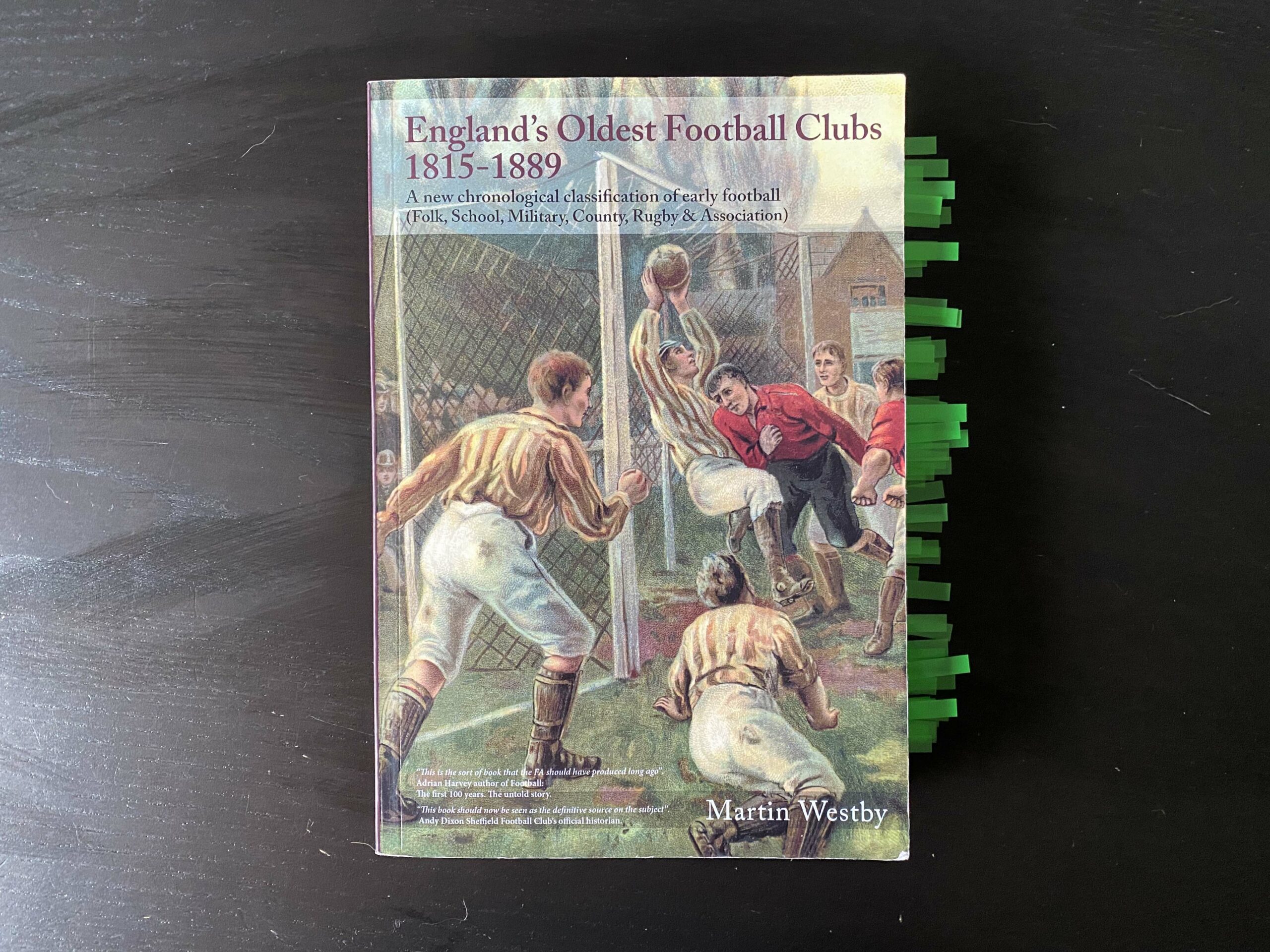 With his book „England’s Oldest Football Clubs“, published 2019, Martin Westby had created a very extensive collection of sources, which not only describes the various clubs in the early phase of football, but also the rules in some places.

I bought and read them – and I think the number of my markings (only passages about football rules) speak for themselves. 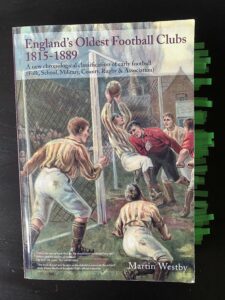 Source collection based on the Football Annual 1868-1908

In the introduction to his book, Martin told how it all began: in 2014, the book „Football Annual“ came into his hands, which for the four decades from 1868 to 1908 was to be published every year by all clubs. Every year the secretaries reported, among other things, the club’s responsible persons, the date of foundation and the type of game (rugby, association or other).

The four decades of the Football Annual have resulted in a database of 297 rugby clubs, 770 association clubs and numerous football clubs from, among others, school and military organisations (which often played according to their own rules). The 620-page book (in the print edition) is based on this collection of sources, the details of which have been cross-checked with the help of the British Newspaper Archive.

After the introductory words on its source and methodology, an overview of football rules follows („The Search for Association Rules 1500 – 1886“, „A chronological history of Football Rules and Laws“).

After a short summary, the book concludes with an extensive list of sources.

The history of the rules and laws

The most interesting part for extra time is certainly chapter 1 with the two parts „The Search for Association Rules 1500 – 1886“ and „A chronological history of Football Rules and Laws“. But also in the following chapters there are repeated references to the rules. The numerous printed newspaper articles also indirectly address the rules, because the respective game is described. It is about the rules of the public school, Cambridge University and the (London) FA. The Sheffield FA is touched upon, as Martin had already published his results before in his book „A History of Sheffield Football 1857-1889. Speed, Science, Bottom.

A nice overview is provided by a source quoted on pages 92-93 (Pall Mall Gazette, 1866[!]): The common features of public schools football:

There were many differences in the rules and regulations of public schools, but there were also similarities that went beyond the obvious (a ball is played with the foot)

After all, 1863 was not suddenly the year in which the football game was born that we call today. Nor for the member clubs of the (London) FA. For until 1871 the handball was still allowed in the form of the Fair Catch, there was a season of touchdowns to decide draws and until 1866 the offside of the Harrow Game. This meant that everyone was offside between the ball and the opponent’s goal, so that only the dribbling game was possible.

From the 1880s onwards, the football game was largely our football game, with penalty kicks and the match officials‘ team not being added until 1891, with almost all of today’s field markings added in 1902. But until the 1880s, most of the rules were based on either the association or rugby rules, as well as the country-specific variants such as Ireland Gaelic Football, Australian Football or American Football.

Martin Westby’s book is a goldmine for anyone interested in the time when the association game evolved from a mix of public school rules into what we know today as the football game. The evolution of the football game. A documentary based not only on the Football Annuals, but also illustrating numerous newspaper articles. More detailed than I know from any other book. Brilliant!

Unfortunately Martin Westby died in September 2020 after a serious illness. Rest in peace.