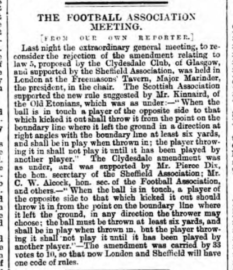 In 1877 the Sheffield FA adopted the FA Rules after several years of trying to find compromises.

Between 1863 and 1877, there were meetings again and again, especially between John Charles Shaw and Charles William Alcock. There were attempts at rapprochement and open dissonances between the two associations on the rules for association football. A representative of Sheffield FC, from 1867 the Sheffield FA, was always present at the annual general meetings of the FA in London and also represented on the committee. But I don’t know what the relationship of Sheffield FC or FA to the London FA was like, because all members had to play according to FA Rules, which was definitely not practiced in Sheffield. (If you know it, please use the comments.)

Sheffield FA and Football Association organized a game for December 2, 1871 with Sir John Charles Clegg, a game between selections of both associations to try out the rules of the other. Shaw and Alcock were the captains of the two selections. But no agreement was reached yet. But in 1872, the FA took the corner kick of the Sheffield FA Rules.

In 1875, the offside rule of the FA Rules was not adopted (everyone standing in front of the leader is offside, when less than three opposite players were between) by the Sheffield FA, who know this rule with „less than two opposite players“. These were not adopted only because the Londoners did not show „a more conciliatory spirit“ (Sheffield Daily Telegraph[1]Cf. Sheffield Football Association. In: Sheffield Daily Telegraph, 26.02.1875, p. 3. ) and / or the Londoners did not want to adopt the Sheffield kick-off rule (Sheffield FA Rules of 1875) as a quid pro quo. The minute book of the Sheffield FA mentioned that otherwise both codes would have been combined („the immediate amalgamation of the two codes“), according to which both associations followed. However, in Sheffield from 1875, the goal measures corresponded to these of the FA Rules – in contrary to the law in their code.

On 24th February 1875 there had been a general meeting of the FA, where Royal Engineers wanted to change rule 5 (throw-in) according to the Sheffield FA Rules to a kick-in. The Sheffield FA supported the proposal and was willing to adopt the FA Rules in this case. C. W. Alcock also supported this proposal. But there was a big opposition and a long discussion. In the end two more people voted against the proposal. Already in 1867, 1872 and 1874 there had been a proposal from Sheffield to adopt their offside rule, which wasn’t adopted.

On April 17, 1877, there was an extraordinary general meeting of the FA, two month after the last one. The only point of discussion was to reconsider the rejection of the amendment to Rule 5. This time the proposal came from Clydesdale Club of Glasgow. There was another discussion, but finally 33 voted for and 10 against the proposal. The Sheffield Daily Telegraph of 18 April 1877 sums up: „[…], so that now London and Sheffield will have one code of rules.“.

Sheffield also adopted the rule that the pitch may measure a minimum of 100×50 yd ( law1), the winner of the toss may choose between the kick-off and side selection (law 2), and that the FA rules on the referee were much shorter and more general: In the event of a violation of the laws 6 [offside], 8 [handball], 9 [illegal play] and 10 [footwear], the ball remains in play until the umpires decide otherwise – but they can only do so after complaints. The FA-umpires only reacted to an appeal.

These were all differences. The FA Rules changed only slightly from 1875, mostly in favour of the FA Rules or by linguistic, but no content adjustments.

The header shows the newspaper report „The Football Association Meeting“ from April 18, 1877 in the Sheffield Daily Telegraph.